One of the iconic locales along the North Shore is Waimea Bay. Although the waters may be calm in the summer months, wintertime brings a world-renowned surf break attracting big-wave surfers from around the world. Photo credit: Getty Images

The North Shore of Oahu has developed a reputation around the world as one of the go-to destinations for surf, sand and shave ice.

And, while those factors are enough to make any trek to the North Shore worthwhile, the area is also home to an array of culturally-significant sites and important land features that add to the region’s aura. When heading out to the North Shore, you might want to take the scenic (and longer) drive along Kamehameha Highway. It follows the winding windward shore of Oahu before eventually leading the way to Turtle Bay, Sunset Beach and Pipeline – just a few of the popular scenic points and surf havens that reside along the route. Or, by traveling through Central Oahu along the H-1 and H-2 highways, one’s North Shore journey jets through countless acres of farmland, some of which is still used to cultivate pineapple, before giving way to Haleiwa. 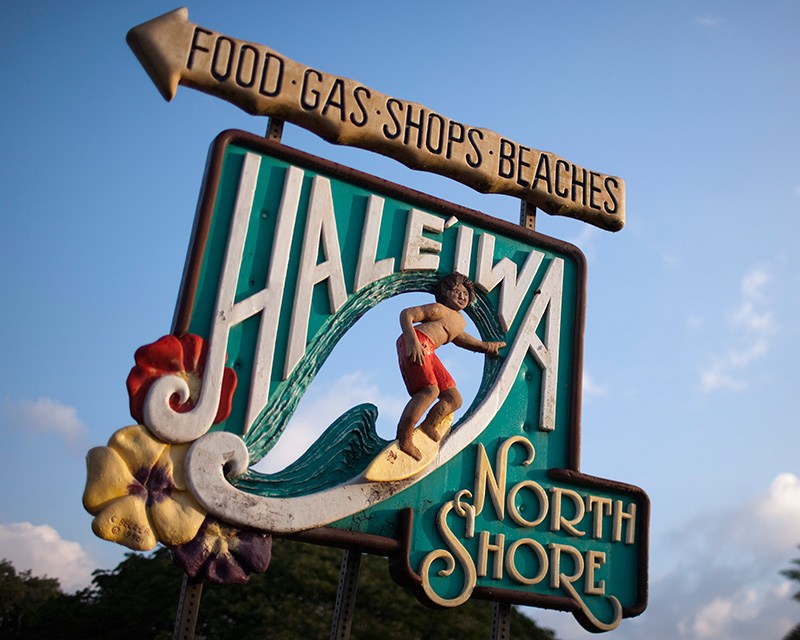 Above: Follow this sign to the bustling “little” town of Haleiwa featuring everything from historic landmarks, ‘ono (delicious) food and plenty of shopping opportunities. The popular destination is surrounded by a boat harbor, inviting beaches, agricultural plots and conservation land. Photo credit: Marco Garcia, Getty Images

After picking up a refreshing shave ice (finely shaved ice chips topped in flavorful syrups), or indulging in a hearty poke bowl (fresh, seasoned raw fish cubes atop rice) in Haleiwa, set course for adventure by visiting some of these unique North Shore locales. 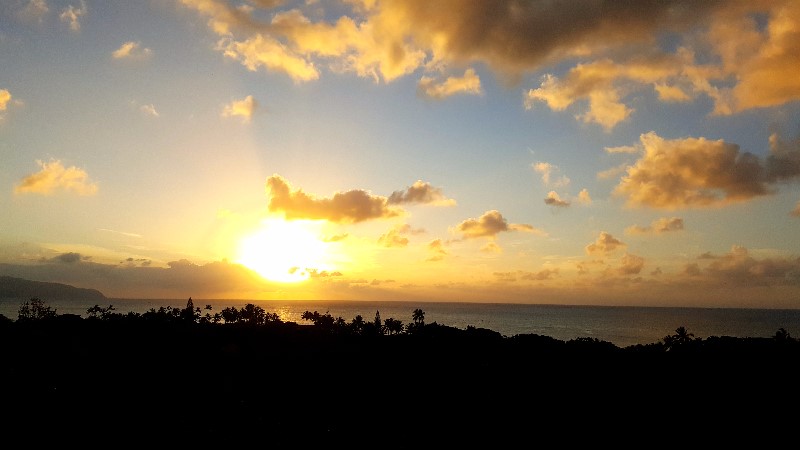 Tucked behind the bustling town of Haleiwa sits Loko Ea, a 400-year-old fish pond that served as a major food source and cultural hub for Native Hawaiians. The significant site falls within the ahupua‘a (land division spanning from the mountains to the sea) of Kawailoa in the moku (land district) of Waialua. The pond makes for a perfect aquatic ecosystem as it is fed by a stream, underground freshwater spring and via the nearby ocean. 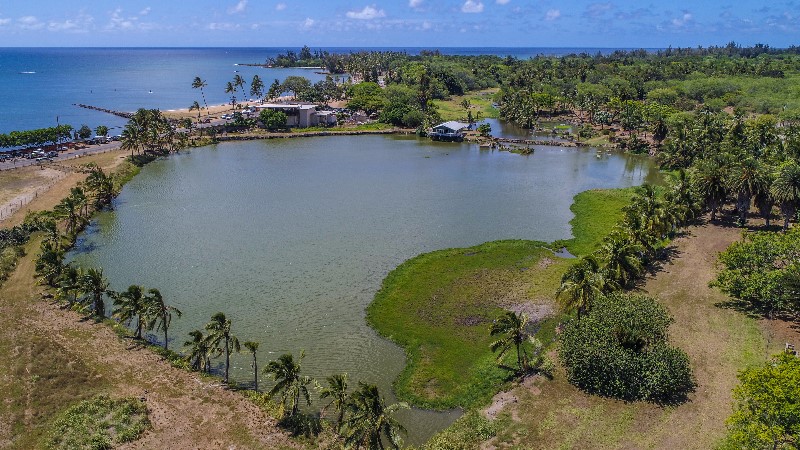 Above: Hundreds of years ago, mahi‘ai (farmers) and kanaka lawai‘a (fishermen) sustained their families and communities by cultivating staple crops, seaweed and fish around and in Loko Ea. Photo credit: Kamehameha Schools

Not only do visitors to this special site get to enjoy the beautiful landscape and sprawling views of the fertile farmland stretching towards the mountains, but Loko Ea also provides a glimpse at how sustainable food systems can function within the third largest existing wetland on Oahu.

To set up an educational tour of Loko Ea, or to find out more about the fish pond and volunteer restoration opportunities offered by the non-profit Mālama Loko Ea Foundation, visit the Loko Ea website. 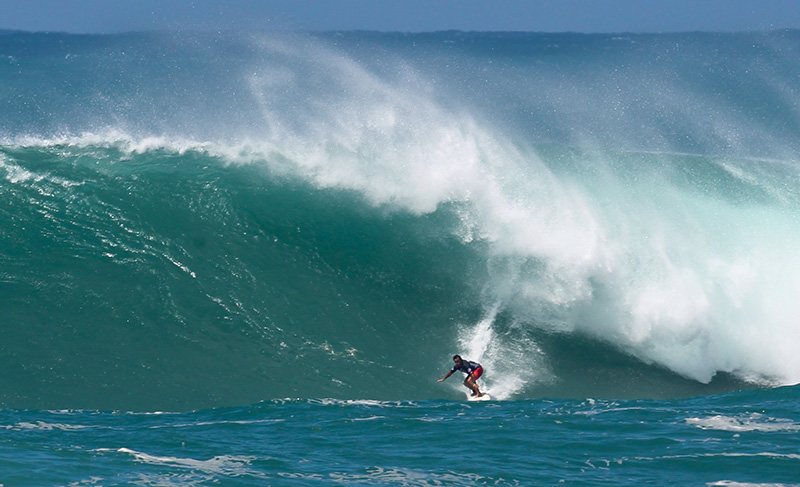 Surf’s Up at Waimea Bay

Whether the Beach Boys are crooning about it on “oldies” radio, or visitors and kamaaina (locals) alike are telling tales of its breathtaking beauty, Waimea Bay is recognized around the globe as a mecca for surfers and ocean seekers along the North Shore of Oahu. During the winter when storms churn in the North Pacific Ocean, Waimea Bay receives the resulting swells – gigantic waves that surfers started exploring 60 years ago.

Waimea Bay is also home to the Quiksilver in Memory of Eddie Aikau Big Wave Invitational, one of the world’s most prestigious surfing competitions. The surfing challenge has only been held nine times since its inception in 1984 as “The Eddie” stipulates that wave heights must start at 20 feet, which generally equates to 30-to-40-foot faces. Essentially, those who participate are prepared to ride mountains of water capable of causing life-threatening damage, as well as offering exhilarating thrill rides. 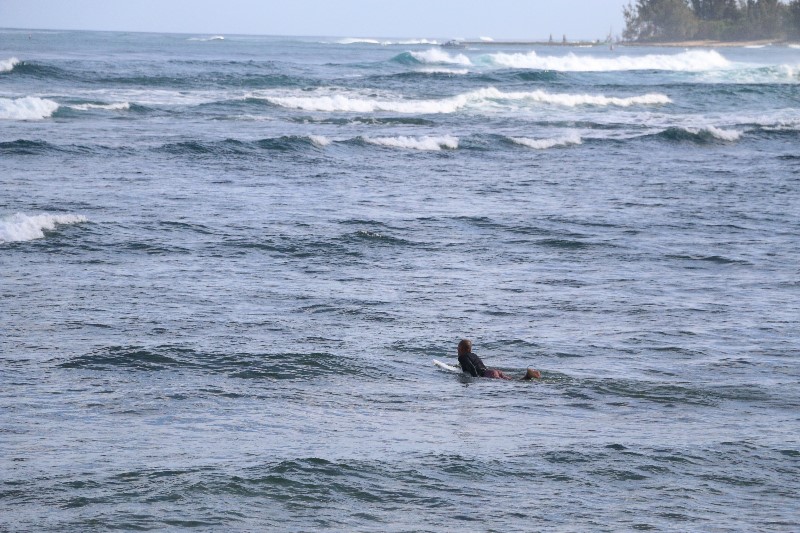 Above: Oahu’s North Shore is known for its expansive white-sand beaches and ample surf spots. Time things right, and you can score an entire set of waves, however, if any doubts arise, don’t go out. Photo credit: Kyle Galdeira

The contest is named after Aikau, the first official lifeguard to be stationed at Waimea Bay who developed a stellar reputation as one of the best big-wave riders in the world. Along with his younger brother and fellow lifeguard Clyde, the Aikau tandem never lost a life while keeping watch over and rescuing those enjoying the surf and sand at the bay. According to local lore, Eddie Aikau surfed every major swell that passed along the North Shore from 1967-78.

Friends and family chose to honor Aikau’s life with the annual surfing contest after the waterman passed away in March of 1978 when the Polynesian Voyaging Canoe Hōkūle‘a that he and its crew were attempting to navigate to Tahiti capsized. Aikau was never seen again, and his body was not recovered after attempting to paddle his surfboard to shore; the remaining crew members were rescued by the Coast Guard soon after.

While the water at Waimea Bay looks inviting, it’s always a good idea to confer with lifeguards on duty before hitting the surf. And, before or after checking out the bay, Waimea Valley offers another opportunity to learn about and experience Hawaiian cultural practices and knowledge in addition to seeing some of the foliage and wildlife that call the Islands home. For more information, go to the Waimea Valley website. 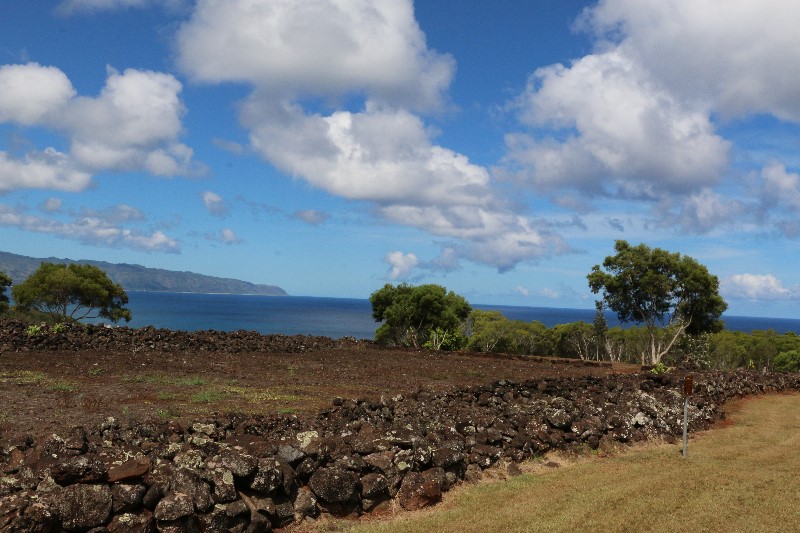 Above: Today, only the rock walls and floor of Pu‘u o Mahuka Heiau remain on the slopes of Pūpūkea. More than 250 years ago, this site served as a temple designated for sacrifice and featured ceremonies aimed at bringing success in war. Photo credit: Kyle Galdeira

Plenty of action can be discovered along the North Shore beach line, but a short trip mauka (towards the mountains) provides an awe-inspiring blast from the past in the form of Pu‘u o Mahuka Heiau

Heiau are places of worship that were constructed by native Hawaiians as spiritual headquarters and centers of power. At its perch adjacent to Waimea Valley, this particular heiau is believed to have served as a luakini heiau (sacrificial temple) upon which ali‘i ‘ai moku (paramount chief of an island or chiefdom) exuded spiritual, economic, political and social control over their lands and people by having animal and human sacrifices performed. This historical site covers more than two acres and represents the largest known heiau on the island.

Fast forward to present day, and it is clear to see that the outrigger canoe has undergone a renaissance as the vessel is now used primarily for racing and recreation. The six-person canoes, which were once crafted from enormous hard-wood trees like koa, are now built from fiberglass and other space-age materials that, in some cases, make the boats lighter, faster and stronger than their wooden counterparts.

Native Hawaiians also used the site as a home base for long-range communications in lieu of the modern conveniences of present day, including cell phones and email. According to cultural experts, the heiau is in a direct line of sight with similar structures on Kaua‘i, and signal fires were used to pass messages – including reported warnings of approaching warriors.

The historic site is situated just south of Pūpūkea, and is open daily during daylight hours. For more information on this and other registered historic sites and national parks, visit the U.S. National Park Service website.