Admission: Starts at $23 for adults, $20 for seniors 65 and older, $20 for students with valid ID and $10 for children 2 through 12 (free for children under 2 and NYBG members). Ticket prices include access to the entire garden and a tram tour. You can buy tickets online to avoid long lines at the entrance.

Notes: Special activities are planned in conjunction with the exhibit, including lectures, classes, film screenings, live music, hula performances, children’s art activities and demonstrations by artisans skilled in lei making and kapa (bark cloth) making and more. Additional fees apply for some of them. Go to the website for details.

The invitation seemed too good to turn down: Paint whatever you please during a nine-week, all-expenses-paid visit to Hawaii, and, in exchange, provide two paintings that Dole Company can use for its national advertising campaign for pineapple juice. Still, Georgia O’Keeffe did not jump at the offer that N.W. Ayer & Son, Dole’s prestigious advertising agency, made in the summer of 1938. By then, the artist had both fame and wealth; she pondered if she wanted to travel to islands in the middle of the Pacific, far from her homes in New York and New Mexico. Ultimately, O’Keeffe decided to go. After a nine-day trip from New York by train and steamship, she arrived in Honolulu on February 8, 1939. She spent just a few days on Kauai. Her time on Oahu and Hawaii island was a whirlwind of sightseeing, social events and meetings. In contrast, her schedule on Maui was far less structured, and she relished the freedom that she had to explore and create.

O’Keeffe spent 18 days on Maui, 10 in Hana as the guest of Willis Jennings, manager of the Kaeleku Sugar Plantation. Because he was busy with work and his wife was in California tending to her ailing mother, he gave O’Keeffe the keys to the family’s car and assigned his 12-year-old daughter, Patricia, to be her guide. 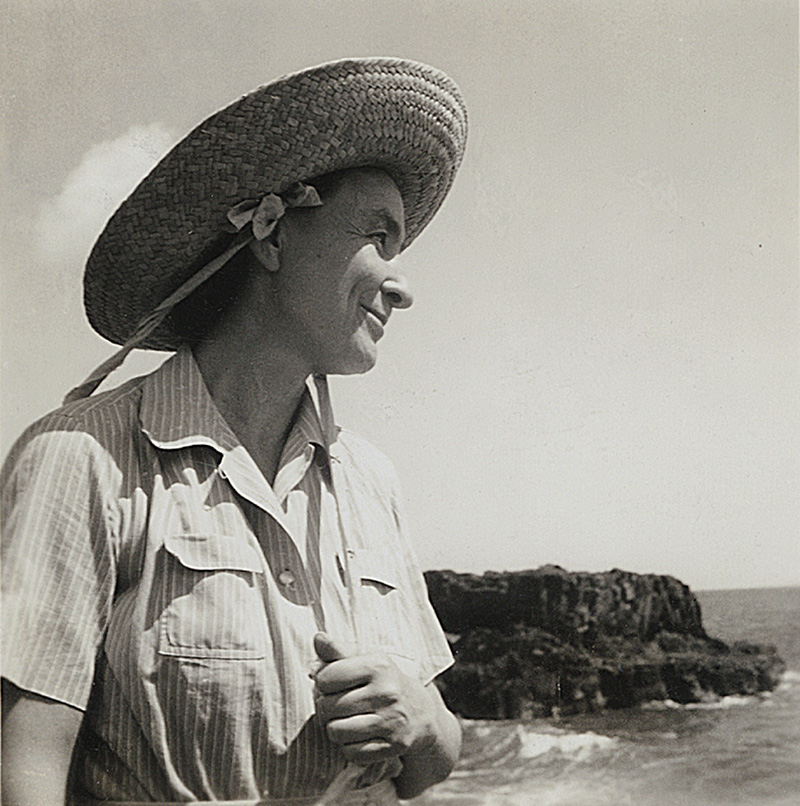 
In a March 18, 1939, letter to her husband, photographer and art gallery owner Alfred Stieglitz, O’Keeffe wrote: “Yesterday afternoon we must have walked a couple of miles along the coast—always we go to a new place—the lava makes a crazy coast—black with the bright blue sea—pounding surf rising very high in the air in many places—queer formations worn in the lava—bridges—gate ways—holes through it where it seems so solid where the water comes up in spray—hissing and blowing.”

O’Keeffe’s fascination with Iao Valley is evident in her March 23 letter to Stieglitz: “It is a wonderful valley—I’ve been painting up it for three days and it is just too beautiful with its sheer green hills and waterfalls—I should say mountains—not hills—a winding road that really frightens me—big trucks have to stop and back up to get round the curves but even if I’m scared it is worth it—you drive about ten miles an hour—it is just a narrow shelf on the side of the sheer mountain walls.”

Later, critics would be united in full-throated praise for her four interpretations of silvery waterfalls flowing down Iao’s verdant peaks. 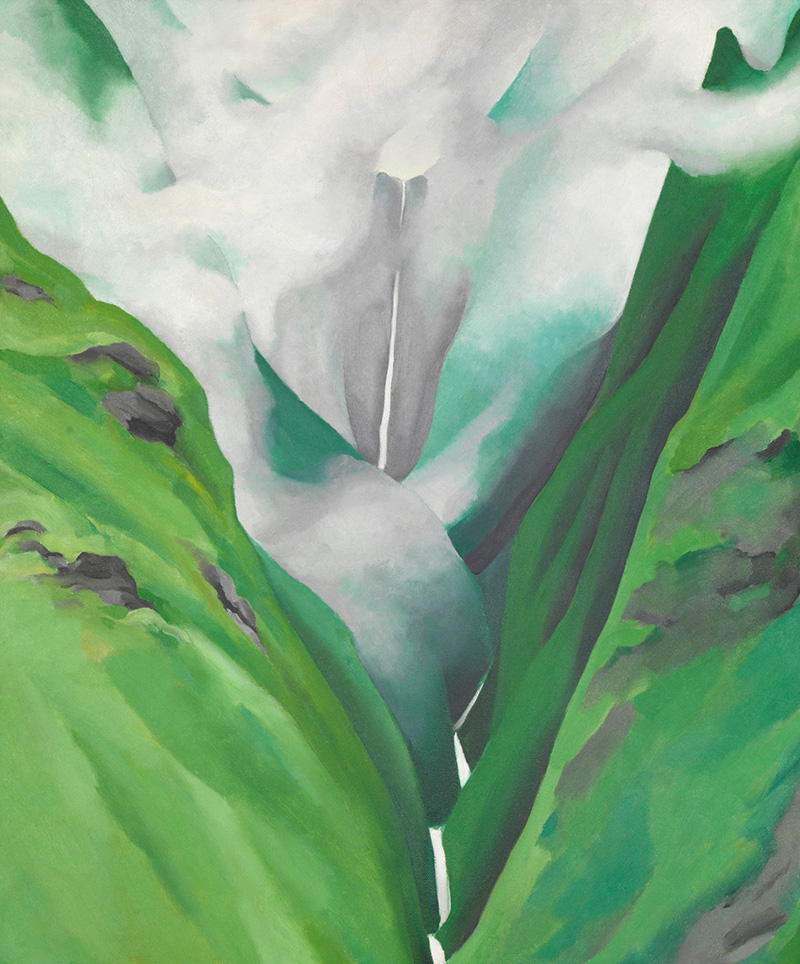 
Theresa Papanikolas, Deputy Director of Art and Programs at the Honolulu Museum of Art, is the guest curator for Georgia O’Keeffe: Visions of Hawai‘i. She curated the Honolulu Museum of Art’s Georgia O’Keeffe and Ansel Adams: The Hawai‘i Pictures exhibition, which was on view from July 18, 2013 to January 12, 2014. For The New York Botanical Garden’s show, Papanikolas provided scholarly background and worked closely with NYBG’s staff to locate the works, secure sponsorships and design the exhibition.

Of O’Keeffe’s Hawai‘i paintings as a whole, Papanikolas notes, “She really did not depart too drastically from her usual style, responding to flora and topography in a Modernist way, much as she had done in her better-known New Mexico paintings. But she did alter her palette to incorporate bright tropical colors to match what was, for her, an outlandish new landscape and portfolio of flora.” 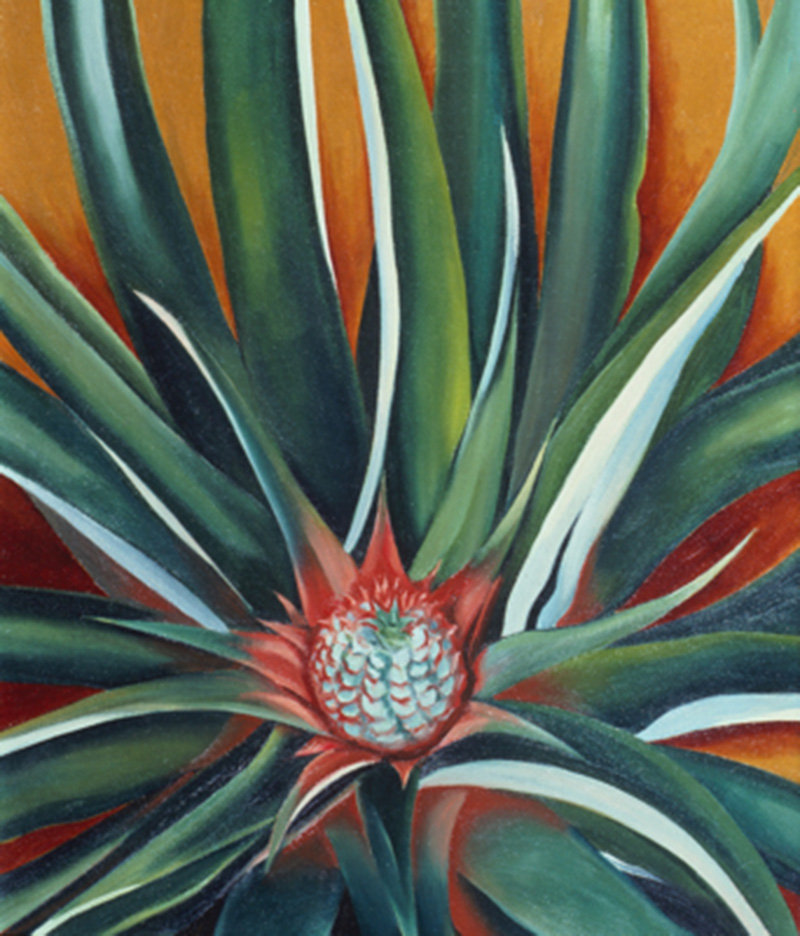 Pineapple Bud
O’Keeffe painted Pineapple Bud to fulfill her contractual obligation to complete a commercial assignment while remaining true to her own identity as a fine artist. It isn’t the usual ripe pineapple. O’Keeffe instead painted the plant, and it takes up the whole frame of the composition, creating a unique view of this familiar fruit. 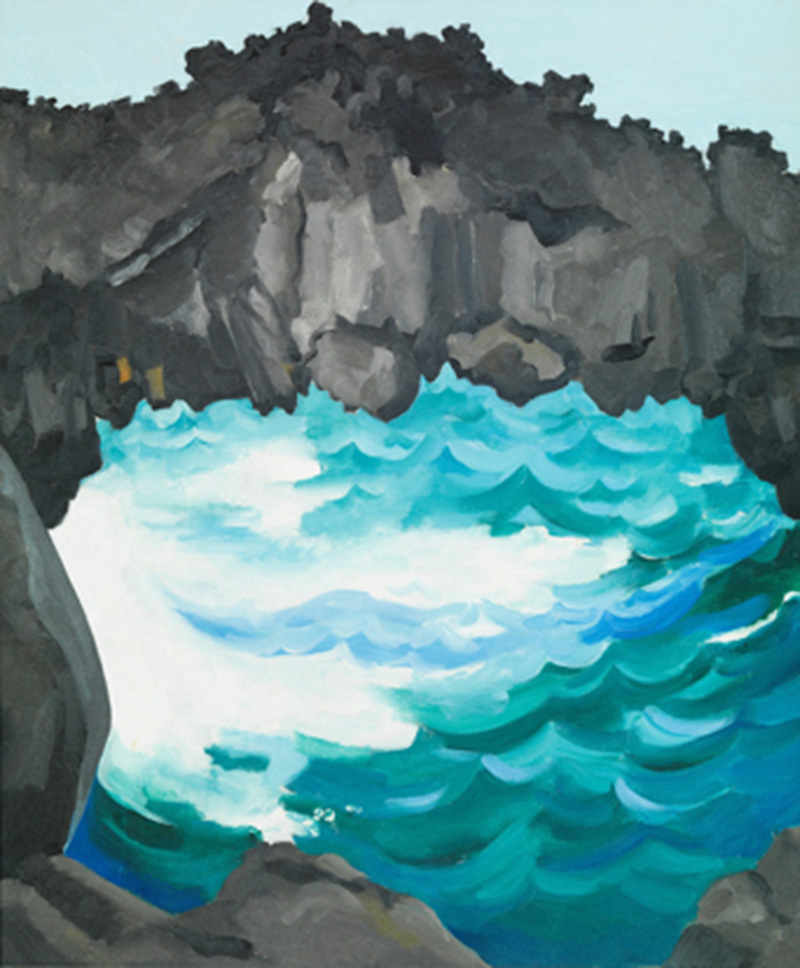 Black Lava Bridge, Hāna Coast–No. I
This painting exhibits spontaneity of execution, compared to other works that have a higher degree of finish. The looser brush strokes suggest that O’Keeffe painted it on the spot in response to her new surroundings. 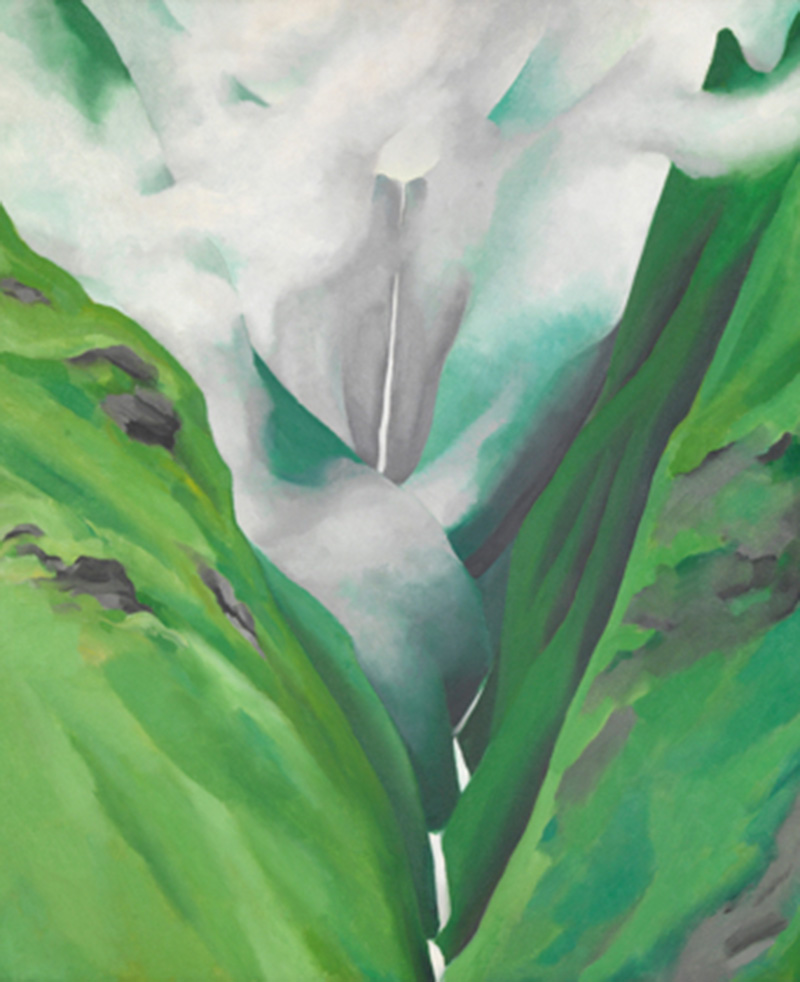 Waterfall–No. III–‘Īao Valley
O’Keeffe so beautifully captures the valley's misty essence with her Modernist painting style. And the way she painted the mountain forms a visual vortex that would go on to become her trademark in future paintings, especially her famed flowers and New Mexico mountain views.

In all, O’Keeffe produced 20 paintings of Hawaii flowers, landscapes, seascapes and fishhooks, although it’s unclear which ones were completed in the Islands and which ones were done after she returned to New York, based on photos, memories, sketches and souvenirs.

The exception is Pineapple Bud.

To fulfill her commitment to Dole, O’Keeffe presented N.W. Ayer with paintings of a red heliconia and a papaya tree, which wasn’t going to work because papaya was the product of a rival company. Although the agency’s executives had given her free rein with regard to subject matter, they were obviously disappointed; they had hoped, of course, that she would paint a pineapple.

Art Director Charles Coiner knew he couldn’t demand the headstrong O’Keeffe to do that, so he gently persuaded her to look at the fruit in the bud stage. He asked Dole’s Honolulu headquarters to send one to her Manhattan penthouse, and it arrived 36 hours later. 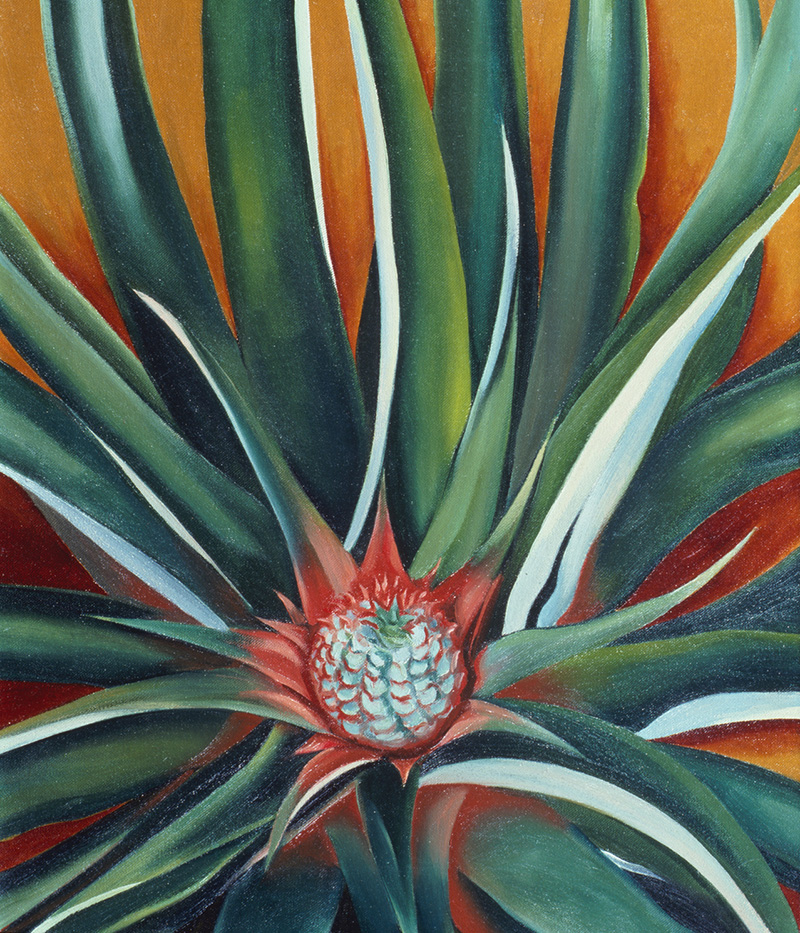 
“It’s a beautiful plant,” O’Keeffe admitted. “It is made up of long green blades and the pineapples grow on top of it. I never knew that.”

She painted it, enabling Dole to have an appropriate work of art for an ad.

All of O’Keeffe’s Hawaii paintings will be displayed for five months in New York. Hawaiian Airlines is one of the major sponsors of this landmark exhibition at The New York Botanical Garden entitled Georgia O’Keeffe: Visions of Hawai‘i (see sidebar above for details).


Above: Celebrating Lei Day during the opening weekend of Georgia O'Keeffe: Visions of Hawai'i exhibit at New York Botanical Garden.